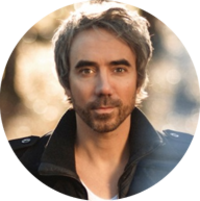 Develop a vision and
just do it!

We are delighted to have found Jan Löchel as an advocate for this project. Being a musician himself, Jan has been actively around in the music business for a number of years now. Hence, the following is by a true connoisseur of the music scene:

In difficult times like these there’s only one way for the music business and its artists in particular:
Develop a vision and just do it.

As just done at SOUND LAKE CITY – which creates not only a temporary platform for MUENSTER MUSIC DAYS 2014, but also a future format and home of sorts for international top-class artists.
This time, there’s more to it than the average rhythm of “arrival – sound check – performance – departure” inviting both musicians and the audience to dwell for a couple of days. This is about unique ambience, a highly versatile venue offering accommodation, the possibility for rehearsal and composing as well as interaction with artists from various circles. And who knows what kind of plans are made in the restaurants and bars on Campus one night or another ... ?

The seed has been planted – and I know from my own experience that this is exactly how special moments in time are created, moments than can’t be planned. This is what art is made of in the widest sense.

Every single programme highlight of MUENSTER MUSIC DAYS 2014 stands for international top class.  This festival is about experiencing live the passion and conviction of our artists in such an intimate setting. An event like this cannot be mapped to the Internet or other media.

In this respect, the stage is a safe terrain for every musician, and us being audience and companions, we are the ones who can make sure it’ll stay like this.

Over the last 20 years, Jan Löchel has lived through many a stop in the music circus. Starting out as a band singer in the mid-1990s, he worked as a producer and songwriter during the past years with and for artists such as H-Blockx, Christina Stürmer, Ivy Quainoo, Sasha, Rea Garvey or ATB. His productions have been awarded gold and platinum as well as an ECHO. Jan has written songs for films, TV programmes and commercials.
In addition, he has founded his own internationally operating music label and has been side coaching The BossHoss for three seasons of The Voice of Germany, appearing both behind and in front of the camera.
Jan Löchel runs a recording studio in the harbour area of Muenster and a small private living-room stage in downtown Muenster.
He is currently working on “Jylland”, his own singer/songwriter project which he will be touring with in 2014.

Our website uses cookies to provide the best possible service. By using our website, you agree that we may use it. You will find further information in our data protection declaration.